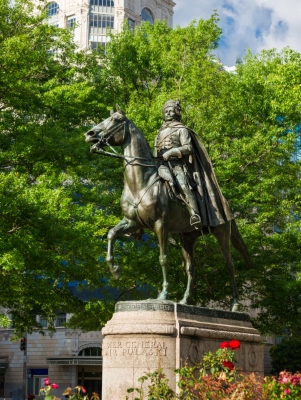 At Sonneveld Orthodontics, we’re committed to delivering the best comprehensive orthodontic care in Orland Park, Tinley Park and surrounding communities in the Chicago metro area. We want to ensure that our patients stay informed of important developments, which includes our holiday hours and closings. Casimir Pulaski Day is a significant holiday for many residents throughout the Chicago area and other parts of Illinois.

Who Was Casimir Pulaski?

We know this Revolutionary War hero as Casimir Pulaski today, but he was born Kazimierz Pułaski in Warsaw in early March 1745. Originally a Polish nobleman, Pulaski was a respected military commander in his homeland before joining George Washington’s armies at Benjamin Franklin’s request.

Pulaski led a gallant charge at British troops during the Battle of Brandywine, allowing American troops to escape. He also disrupted a British siege in Charleston, South Carolina. He died on October 11, 1779, after riding into battle to rally French and American troops at Savannah.

The United States Congress and President Barack Obama posthumously conferred citizenship on Pulaski in 2009. Casimir Pulaski is a moveable holiday that always lands on the first Monday in March. In 2019, it falls on Monday, March 4. Depending on the area, it may be a closed day for schools, libraries, banks, courts and some private businesses. Many jurisdictions commemorate it with public festivities.

Your Orthodontist in Orland Park

With over 25 years of professional experience, Dr. Thomas Sonneveld provides personalized care with state-of-the-art methods in a comfortable office environment. To learn about orthodontic treatment options, complete our online appointment request form or phone us at (708) 403-2626.